Trustees of the Town and Manor of Hungerford: Environmental Land Management 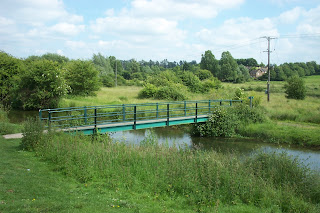 Working closely with ex-farmer and Trustee Secretary Robert James, and with Natural England, I managed the Trustee's application and agreed Higher Level Stewarship Schemes (HLS) since 2005. The Trustees own strategically important land and rivers around the market town of Hungerford, Berkshire. This includes Portdown Common, Freeman's Marsh SSSI, Eddington Marsh/Harvey's Meadow (SSSI) and land adjacent to the River Kennet north of Eddington Bridge. The Trustees, with help from their excellent River Keeper, Rob, also manage a productive wild and stocked Brown Trout and Grayling fishery on the Rivers Kennet and Dun - chalk rivers that are the pride of West Berkshire. Grants from HLS have been used to manage grazing, fence riverbanks (and thus protect the fragile ecology of the rivers), carry out river and canal bank restoration, pollard willows, manage scrub and provide information to the many visitors to the area. Being close to the town, Portdown Common and Freeman's Marsh are popular for dog-walking and during summer 'dogs-on-leads' are requested for certain areas. Hundreds of people every year have also enjoyed guided walks, river dipping and fly fishing demos while a group of stalwart volunteers under Sally Wallington's and Rob's guidance carry out tasks such as scrub control, path improvement and constructing and installing brushwood groynes to improve the river. For information about the Trustees (an ancient charity with a very interesting history) see their website. I retired from this role in 2019, Sally Wallington has taken over my role in managing the new Countryside Stewardship agreements.

RSPB Winterbourne Downs, Wiltshire
This is a nature reserve where hundreds of hectares of flower rich calcareous grassland have been created on former arable land on the edge of Salisbury Plain. During 2012, I worked with the with botanists Dr Phil Wilson and Marian Reed on a contract to record the success of grassland establishment and to propose an approach for introducing some of the more exacting chalk grassland species that were not originally introduced. Already the grasslands are well on the way to attaining the floristic qualities associated with long-established grasslands on the Plain; further small-scale inoculations of 'missing' species have also been undertaken this autumn - Devil'sbit Scabious, Stemless Thistle and Saw-wort are just three species that have been collected from nearby grasslands and sown on the reserve by its site managers and volunteers. The success of this project, and its scale, demonstrates that habitat creation can, if done well, deliver, relatively quickly, massive biodiversity benefits. You can find information about the reserve on the RSPB's website. 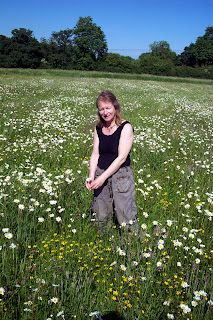 
This project was funded through the government's Countryside Stewardship scheme and private funding via the predecessors of the West Berkshire Countryside Society.

A plan setting out the ground preparation methods, wildflower seed specification and method for establishing the meadows was provided to the landowner.

The site consisted of two arable fields adjacent to the River Pang on poor, gravelly soil with a high water table. One field (7ha) was sown with wild-harvested seed I collected from local wildlife trust meadow nature reserves nwith my brush harvester. The other 9ha field was sown with a bespoke seed mix of 16 British native-origin wild flowers and 6 amenity grass varieties (native species, but registered cultivars) obtained from Emorsgate Seeds. To address problems with site preparation and readiness, one field was sown with a rye-grass cover the autumn before it was sown with the wildflower seed mix. The rye-grass was cut for hay then sprayed with weedkiller before seed was spread on it in the following autumn.

As with many schemes, a longer lead-in time was needed than had originally been envisaged. The rye-grass cover is a good method that I recommend using and means that the soil doesn't need to be ploughed or disced again (which tends to stir up weed seeds).

Budget was a limitation with the larger field and the bespoke mix was designed to fit the budget (£2000 for 9ha), necessitating a lower than usual quantity of wild flower seed. However, others have shown that if new meadows are properly managed, sowing at a lower rate makes no significant difference in the long term.

Management
The meadows were sheep-grazed in early spring and autumn. Hay was cut from the meadows in Years 2 and 3, but by Year 4 (2010) residual fertility had declined. This, coupled with the long spring and summer drought and lack of organic matter* over the underlying gravel meant that over much of the meadow grasses withered, but the wild flowers were fantastic. 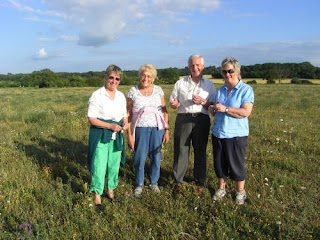 Photo: shows how little growth there was in 2010 over the very stony parts of the field (24 June). This is a reflection of the fact that the soils had been completely knackered owing to growing arable crops, coupled with a drought at this time.

*A characteristic of intensively and chemically farmed arable is that the organic matter (humus) has been completely lost. It will take many years for soil fauna to recolonise (e.g. earthworms, mycorrhizal fungi) and humus to rebuild. For this reason, once residual Nitrogen has leached out, these newly created grasslands are terrifically infertile - far more so than long-established old grasslands. 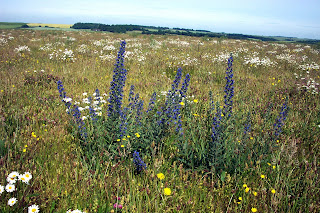 HEADS FARM
Around 40ha of ex-arable over chalky soil on the Berkshire Downs was sown between 2003 and 2005 with wild-harvested seed from Salisbury Plain and the Cotswolds. Additional species were collected and also introduced. In all over 60 species were sown. Other wildlife that have benefited from the new grassland include Corn Bunting, Lapwing, Barn Owl, Skylark and butterflies. Swallows feed over the grasslands in mid-summer, which are alive with insects.

Management
The fields were spring and autumn grazed and cut for hay for the first few years, although the hay was left lying unbaled in 2008 owing to the wet weather. Spear Thistle was cut late June in Year 2. Dock and Creeping Thistle were cut before flowering in Years 2-3 and have now declined owing to competition from all the other grassland plants. By 2010, residual fertility had declined. The fields are topped in late summer and grazed autumn-early spring with sheep or cattle.  In future years the fields could be extensively grazed from mid June onwards, which would encourage the smaller chalk species to thrive (e.g. Salad Burnet). 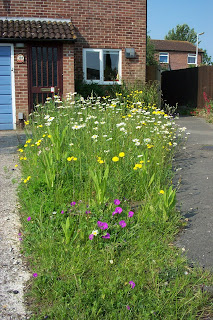 Over many years I  incrementally transformed a rockery measuring only a few square metres, into a flower-rich meadow containing nearly 40 species of flowers, sedges and grasses. This goes to show that you do not need to have a large area to create a stunning wildflower meadow. If only 10% of gardeners could create a wildflower meadow of this size, this would dramatically increase the value of urban greenspace for wildlife.Some non native flowers are also in this meadow, which is fine for gardens and give even more colour and variety (e.g. the garden form of Bloody Cranesbill).


Management
The meadow was kept short until mid April, after which the Cowslips flower. I also didn't mow where the Tassel Hyacinths grow until they have flowered. Mowing was then stopped on the main bit until late June, leaving any knapweed plants uncut. By late June or early July, the area began to look tired. The grass was then kept short the rest of the year. I sold up in 2010 and doubt the new owners have kept the meadow, but I have sown a new one in the front garden of my new home, using seed harvested from Heads Farm (see above). It has taken well (sown April 2012) thanks to the wet summer, so am looking forward to seeing some flowers next spring. (The new meadow is about 12 sq metres.) 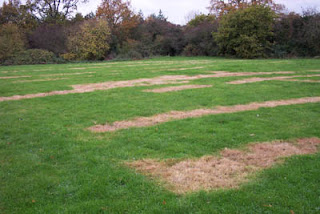 This site was a narrow strip of grassland (approximately one acre/0.3 hectare) that was part of the adjacent allotments until sown with clover and rye-grass in the 1990s. Until 2004 it was managed as short grassland, being regularly mown.

In autumn 2004, strips in the field were treated with a total-kill weedkiller, and small patches rotovated. Wildflower and grass seed of neutral meadow species, including Yellow Rattle, was sown in these patches in autumn. 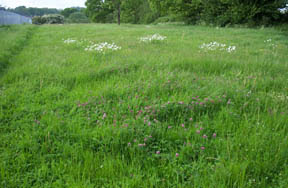 Management
*there is a fire risk if dry grass is left, as children will inevitably want to set fire to it.

I devised and developed this four-year project on behalf of the restoration charity Flora locale, and provided ongoing technical support to the Wild Meadows of Wales Project Officer employed on this project.

Support included co-writing the Manifesto for the Wild Meadows of Wales and other information for landowners, such as the leaflets, Paddocks for ponies and biodiversity and Grazing for wild plants and biodiversity. All the leaflets can be downloaded from CIEEM's website. The info can be hard to find - please contact me if you need help. I also have a stock of some of the printed leaflets and also electronic copies.

I have also written many advisory leaflets detailing methods for collecting seed and creating new wildflower grassland for Flora locale, a small charity which I co-founded in 1997 but ceased trading in 2018.

Based in: Frome, Somerset

Quoted for on an hour-rate or day basis according to job. Reduced rates for charities and parish councils. I am not VAT registered.